The bureau denied Fox’s appeal on a July 19 resolution that ordered her deportation. The Immigration order also barred her re-entry by placing her on its blacklist.

Guevarra earlier said Fox can still file an appeal with the Justice Department, which has jurisdiction over the BI.

The 71-year-old missionary was accused of engaging in partisan political activities, which the government deemed as a violation of the terms of her stay in the country.

However, her lawyers argue that fighting for the rights of minorities is part of her missionary work. Fox’s camp also maintains the gatherings she attended were not anti-government.

The Justice Department earlier nullified the Immigration order to forfeit Fox’s missionary visa and the order for her to leave the country by end of May, saying it was “without legal basis.”

The BI on April 16 arrested and detained Fox for “attending protest rallies and engaging in political activities.” She was released after a day of questioning.

President Rodrigo Duterte later admitted he ordered the probe on Fox’s “disorderly conduct,” adding she has a “foul mouth.” 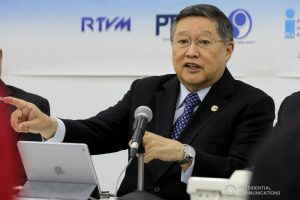